Janet Valentine - In the Spotlight

Out of the Fold member Janet Valentine was chosen to represent Region 8 (Essex and Suffolk) of the Quilter's Guild for the 'In the Spotlight' gallery at the Festival of Quilts 2013 which took place in Birmingham last week. The theme of the gallery was 'Underground' to celebrate 150 years since the first London tube station opened. 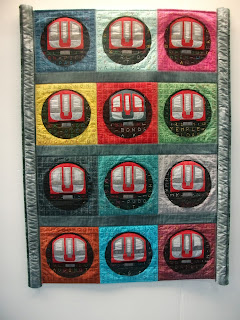 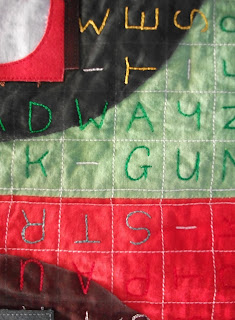 Janet's quilt was a personal one as well as one for public display as she chose to feature the stations and routes she used whilst living in London as a child and young woman.  Dyed cotton. Applique. Machine stitched.

Janet will be showing and talking about her 'Underground' quilt at the Quilter's Guild Regional Day on 19th October 2013 at Woolpit Village Hall www.quiltersguild.co.uk
Posted by Out Of The Fold Textile Group at 20:59